WHAT IS YOUR NAME? – RETURN TO YOUR HOME!

That Gospel Reading, sometimes known as ‘The Healing of the Gerasene Demoniac’, has got lots of difficulties, both textual and interpretive.

Jesus is travelling around Galilee, teaching preaching, healing, arguing.  At the beginning of chapter 8 we hear, ‘[Jesus] went on through cities and villages, proclaiming and bringing the good news of the Kingdom of God’.  So, it’s quite clear, his mission is about the Kingdom of God – he’s proclaiming it, and bringing the good news of it – interesting words to use.

And, as if to emphasise that, a great crowd gathers around him, and he tells them the Parable of the Sower, which in Luke’s version, he interprets for the disciples with the words, ‘to you it has been given to know the secrets of the Kingdom of God’ [Lk 8:10].

Soon afterwards, and immediately before the passage we had read to us, Jesus calms the storm, showing his power over the forces of nature, and astonishing the disciples, who exclaim, ‘Who then is this, that he commands even the winds and the water, and they obey him?’ [Lk 8:25].

Our passage begins: ‘They arrived at the country of the Gerasenes, which is opposite Galilee’ [Lk 8:26].  Immediately, we have our first textual problem – the ancient manuscripts have different names here: Gergasa, Gadara, and Gerasa – Gergasa is on the shore of the Sea of Galilee; Gadara is about 5 miles South-east of the lake, but with lands that stretch down to the shore; and Gerasa is about 33 miles South-east of the lake [See Green, Luke, p.337].  The strongest textual reading of the manuscripts, Gerasa, is also the most difficult, and that’s the one the translation we use, the NRSV, has opted for, and it’s also the one chosen by the NIV.  Just a little insight into the difficulties that Bible translators have to face.

The critical thing, however, is that it is ‘opposite Galilee’ – opposite in the literal sense of being on the other side of the Lake; but also opposite in the significant sense that Jesus has moved from Jewish territory into largely gentile territory, a Hellenistic area.  The poor man who is possessed by demons not only lives in a gentile area, where ritually unclean pigs were reared, but is also ‘naked’ and living ‘among the tombs’ – both of which mark him out as separate from normal society.  In every way, he is an outsider.

The way the narrative is told is carefully crafted.  In v. 28, the man says, ‘What have you to do with me, Jesus, Son of the Most High God?’ – but in v. 29, we’re told that Jesus had commanded the unclean spirit to come out of him – followed by a description of what the unclean spirit had been doing to him.  The story is told in dramatic order, not in chronological order.  Here we see something of Luke the Evangelist’s work in re-telling the material he had received through the tradition of the Church to express the message about Jesus he wants to convey to his hearers.

This is a curious response, a Legion being a Roman military unit of around 5,000 men.  What’s happening here?

Well, clearly, it’s an indication of the severity of the man’s possession – ‘many demons had entered him’; but it’s also an indication that it’s not only Jesus’ compassion which extends to the gentiles, but also his power and authority [See Green, op cit, p. 339].

In the previous passage, Jesus’ power over the winds and the waves has been proven – and now, it is the turn of the unclean spirits, a whole legion of them, to know his authority to command them.  They recognise with whom they are dealing as they beg him not to order them to go back into the abyss, that prison reserved for the punishment of demons [See Green, op cit, p. 340], but rather negotiate a transfer into the nearby herd of swine, from whence they are driven to their deaths.

In an unusually long narrative, the swineherds then rush off to the city and tell everyone what has happened, and the people rush back to see for themselves, finding the man who had been possessed ‘clothed and in his right mind’ [V. 35].  Understandably, they are much disturbed by the presence of one who has such power, and who has saved a man by destroying a herd of swine, and presumably, disrupting the livelihoods of the swineherds.  They ask him to leave – ‘so he got into the boat and returned’ [V. 37].

But, once again, we’re told the story out of sequence.  Having got into the boat and returned, we’re then told that the man begged Jesus that he might join his band of followers, but Jesus tells him to ‘Return to your home, and declare how much God has done for you’ [V. 39] – and that’s just what he did.

Now, I’ve spent a bit of time looking at that passage in detail, partly to reflect on the difficulties of biblical translation, and the choices the translators have to make, partly to reflect on the way that the Four Evangelists consciously shape the material they have to emphasise the message they are trying to proclaim through their writings, and partly to begin to delve into the multi-layered narrative we’re reflecting on this morning.

But I’d like to go back to the question and the command I mentioned in the beginning: ‘What is your name?’ and ‘Return to your home’.

‘What is your name?’ – Jesus is literally asking him to name his demons.  Names in the ancient world, and still to some extent today, were believed to give power over the person named, in a rather ‘magical way’.  The demons name Jesus as ‘Son of the Most High God’, a largely pagan usage, recognising his power over them.  And he in turn forces them to reveal their name – Legion – using his power over them.

On the journey of faith, we also are invited to ‘name our demons’, to look honestly at ourselves, to see where the blockages are that are hindering our progression in the Christian life.  What are the things which stop us from being fully open to God and to other people?

At Bernard Warner’s Funeral Service here on Thursday, I’d asked his neighbour, Nelson, to read a passage from the end of John Bunyan’s ‘A Pilgrim’s Progress’, which he did wonderfully well.

After this it was noised abroad that Mr Valiant-for-Truth was taken with a summons, and had this for token that the summons was true, that his pitcher was broken at the fountain. When he understood it, he called for his friends, and told them of it.

Then said he, I am going to my Father’s: and though with great difficulty I am got hither, yet now I do not repent me of all the trouble I have been at, to arrive where I am… So he passed over, and all the trumpets sounded for him on the other side.

Mr Valiant-for-Truth enters the Pilgrim’s Progress quite late on, and has to struggle single-handedly against three rogues who challenge him either to join them, or to turn back on the life of pilgrimage, or to die on the spot.  He chooses the last and fights ‘till my sword did cleave to my hand’.  Scarred in the battle he yet emerges victorious as his opponents flee.

In spite of the difficulties, he continued with his journey, and came to a glorious end, as ‘he passed over, and all the trumpets sounded for him on the other side’.

We need to ‘name our demons’, to look at what is holding us back, and to ponder, ‘What next?’  To what service, or ministry, or act of kindness, or challenge, or prayer is God calling me now?

And at the climax of the Gospel Reading we heard this morning, the demoniac begged Jesus that he might join his band of followers, but Jesus tells him to ‘Return to your home, and declare how much God has done for you’.

The man wanted to go with Jesus, to join with this marvellous man who had healed him; but, as on other occasions, Jesus says, ‘No, stay where you are – become ‘a kind of gentile evangelist’ [CT, 21/VI/19, p.19] where you are’.  And so he does, he ‘proclaims throughout the city how much Jesus had done for him’ [V. 39].

There are those who are called to leave their homes, their jobs, sometimes their families, to be missionaries or evangelists, or ordained ministers in other places.

But the much more customary calling is to ‘blossom where you are planted’, to stay in your family, your job, your community and to make a difference there.

If we were all able to ‘proclaim throughout the town how much Jesus has done for us’, what a difference that would make.

As we progress in the Christian life, were called continuously to look at ourselves, and see whether there are things that are holding us back.

And, for most of us, we are called to stay where we are, and to live the Good News of the Kingdom of God in our own communities, families, places of work and leisure – and to make a difference there.  AMEN.

All are welcome to attend on Friday, June 28th, 11.00a.m., the Memorial Gardens, Fordingbridge (Opposite the Car Park for the Rec), when a Memorial Plaque will be unveiled on the Centenary of the Treaty of Versailles, which officially brought the First World War to its end.

A short ceremony, followed by refreshments. 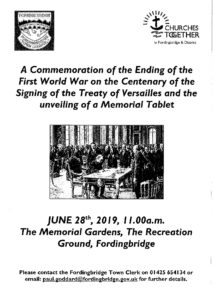